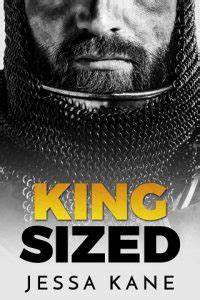 A man named Rex decides to become a personal guard for a princess that becomes queen because her parents are assassinated when he first sees her at a parade. After he comforts her they both spiral into a love at first sight sexathon.

This then leads the two of them into a back and forth struggle with their different stations. She being a newly appointed queen, young and inexperienced. Him being a love struck guard who can’t get over the thought that the princess is too high out of his reach.

This made me chuckle. King Sized literally. At one point the Princess described the guy as being as big as her ankle. HA! Sorry, but no, even if the guy is that big I know for a fact, according to a lovely nurse friend, they can’t use it. All the blood rushes to fill something that big which basically means all of their blood leaves the rest of their body. They pass out! So, the description made me chuckle out loud and I couldn’t hide it from my partner.

But yes this book made me laugh, but it also frustrated me a little bit. I get going through a crisis. But… BUT! The guy went through the same crisis multiple times before, during, and after taking the Princess’s, oh no wait, Queen’s virginity. ‘Oh no! she is so far above me and out of my reach I wouldn’t, couldn’t, shouldn’t, bollocks I have’. He literally just took her virginity and considered leaving her. Dude! You just had sex with her! You can’t send her off to a prince to marry. Virginities can’t be replaced so… someone would find out and the scandal would cripple her confidence anyway. Plus, not being funny but it only takes one! One! out of the millions of sperm that would be in the first shot you had. Which means Low and behold King Sized your baby is possibly cooking in there. Deciding to leave is pretty crappy… I felt like screaming in frustration. The sex scenes weren’t really making up for the stupidity of the man.

However, he did step in, in the end. He came to the decision afterwards to finally screw the world and ask her to marry him. I mean, the Princess had asked him outright to her King. He said no because he thought she could have better. Well… not anymore Dude! You haven’t protected her from any form of scandal. Actually you just broke her heart and looked like an arse. Luckily, the daft idiot came to his senses. But only after going to war. (Spoiler woops)

Thank you so much for reading. Write again soon. Bye!

We still have spaces this week for privates and classes! Message to book!
💙 Silks and Pole next week 💜
💙 Vaccination 💜
💙 Competition winner 💜
💙 Competition is now closed 💜
💙 Last Chance Hour 💜