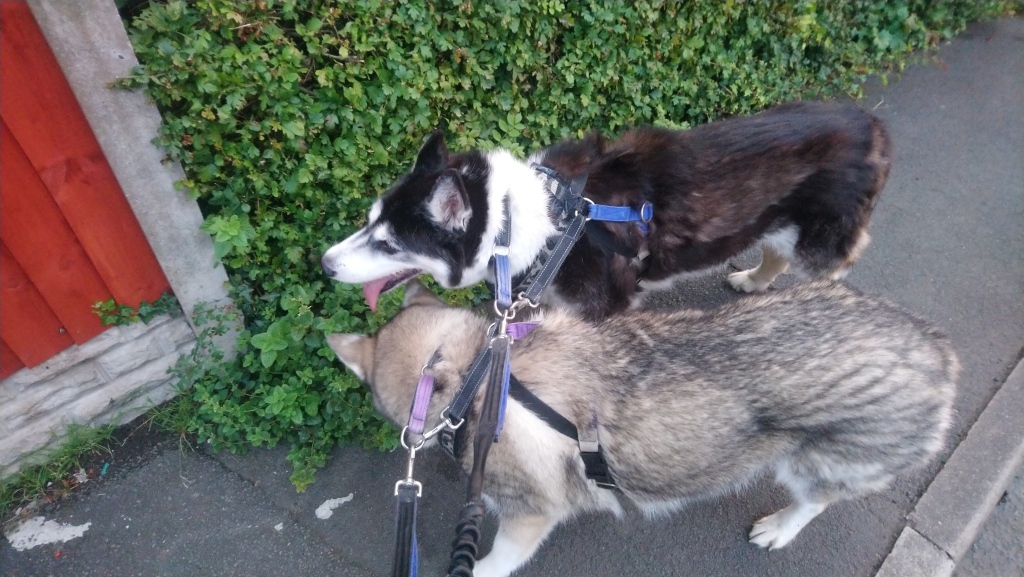 I have been running with my dogs for years on and off really. And through those years my dogs have taught me one thing about when I go running of a morning.

It really doesn’t matter how slow or fast you are. It doesn’t matter if you have to take a minute to breathe before carrying on. As long as you finish the distance you set yourself.

I also used to get through at least ten miles without stopping. Obviously not the dogs faults, they need to go they need to go. However, Bandit does something I am not sure I understand. He is already a little bit of a wierdo, haha, but this is something I haven’t seen other dogs do.

He stopped me at least nine times on a five mile run for a poop. OK that doesn’t sound too weird, but when that poop stop literally produces nothing because there is nothing in his stomach after the second stop that is when it is weird. Nine times and the first two produced some sort of poop that I could pick up and bin. Three to nine didn’t produce anything except for speckles of water. The same sort of speckles a paint brush would produce on a canvas if you dipped it in paint and then ran your finger over the bristles flicking the spots onto the canvas.

You can imagine that once I hit eight on the stop count I had lost a little patience. There was nothing in his stomach what was he squatting for? I can also never shake the embarrassment of looking like I am just about to leave a dog poop on the pavement for the general public to find when passing cars drive passed. Even though I know there is nothing to pick up it is still criminally embarrassing.

These stops didn’t include Luna’s pee stops which aren’t that frequent but she doesn’t tend to stop for a poop during the runs.

Even though all focus has gone onto just keeping a steady pace, my dogs have managed to literally tug into me patience up to a point while running. All competitiveness to try and be faster or to think maybe we won’t stop this time has all gone.

Thank you for reading. If you have a weird dog like mine don’t worry you are not alone! I will write again soon. Bye!

HAPPY NEW YEAR!!
Why not celebrate mental health day with booking a private or class with us!
Private sessions.
Very limited spaces on our classes!
💙 Outdoor Private 💜
💙WIN 2 FREE CLASSES!💜